Third Sunday of Advent
Feast of Our Lady of Guadalupe

December 18, 2022
Students learn about ecological justice and care for our common home at Benincasa Community in Guilford, CT.

To reimagine lineage: Today we invite you to explore lineage with Patricia Datchuck Sánchez; engage with Thomas Berry’s Principles of the Universe; and embody the belief that Earth is our common home.

YHWH spoke to Ahaz,
“Ask for a sign from YHWH;
let it be deep as the nether world, or high as the sky!”
But Ahaz answered,
“I will not ask! I will not test YHWH!”
Then Isaiah said,
“Listen, O House of David!
Is it not enough for you to weary those around you,
must you also weary YHWH?
Therefore, the Holy One will give you this sign:
the young woman will be with child, and give birth,
and the child will be given the name Immanu-El.

Response: And the Holy One will come in — Our God, the glorious One.

The world and all that is in it belong to Our God, / the earth and all who live on it.
Our God built it on the deep waters beneath the earth,
And laid its foundations in the ocean depths.
R: And the Holy One will come in — Our God, the glorious One.

Who has the right to go up Our God’s hill? / Who is allowed to enter Our God’s Temple?
Those who are pure in act and in thought, / who do not worship idols or make false promises.
R: And the Holy One will come in — Our God, the glorious One.

Our God will bless them. / God, their savior, will declare them innocent.
Such are the people who come to God, / who come into the presence of Our God.
R: And the Holy One will come in — Our God, the glorious One.

From Paul, servant of Christ Jesus, called to be an apostle
and set apart to proclaim the Good News,
which God promised long ago through the prophets,
as the holy scriptures record —
the Good News concerning God’s Only Begotten,
who was descended from David according to the flesh,
but was made the Only Begotten of God in power,
according to the spirit of holiness,
by the resurrection from the dead: Jesus Christ our Savior.

We have been favored with apostleship,
that we may bring to obedient faith all the nations,
among whom are you who have been called to belong to Jesus Christ.
To all in Rome, beloved of God and called to be holy people:
Grace and peace from our Abba God and our Savior Jesus Christ.

This is how the birth of Jesus came about.
When Jesus’ mother, Mary, was engaged to Joseph,
but before they lived together,
she was found to be pregnant through the Holy Spirit.
Joseph, her husband, an upright person unwilling to disgrace her,
decided to divorce her quietly.
This was Joseph’s intention
when suddenly  the angel of God appeared in a dream and said,
“Joseph, heir to the House of David, do not be afraid to wed Mary;
it is by the Holy Spirit that she has conceived this child.
She is to have a son, and you are to name him Jesus ‘salvation’ —
because he will save the people from their sins.”
All this happened to fulfill what God has said through the prophet:

“The virgin will be with child
and give birth,
and the child will be named Immanuel,”
— a name that means “God is with us.”

When Joseph awoke, he did as the angel of God had directed,
and they went ahead with the marriage.

The “origin story” for those of us in the current age, must be larger, wider and deeper than past human origin stories

All of us search for answers to the question, “who am I?” within the story of our parents. How we came to be, to whom we were born, and who raised us are the foundational narratives of our lives. We understand ourselves in relation to our lineage–whether we are proud, ashamed, fortified or troubled by those stories; whether we ultimately accept them or reject them.

In The Word We Celebrate (1989), Patricia Datchuck Sánchez explains, “When Matthew wrote, he did not intend to defend Mary’s virginity or to lay the theological foundations for the virgin birth. Only in the fourth century CE were these factors fully explored and only then were official pronouncements made.”(10) In other words, Jesus did not carry an identifying narrative about his virgin-birth. That was not his origin story.

Instead, Datchuck Sánchez shifts our attention back to what mattered most to the Jewish people and those encountering Matthew’s gospel account. Rather than focus on Jesus’ parents and Jesus’ birth, Matthew’s major focus was upon the name and vocation of the child to be born. He would be called Jesus, a later form of the name Joshua, originally meaning ‘Yahweh saves’. (10) For the Jewish people living in territory occupied by the Romans, Jesus would bring liberation. His “vocation” is elaborated upon in the passage immediately following today’s Gospel, in the “Canticle of Mary”: to show mercy to those who reverence God, disperse the arrogant of heart and mind, dethrone rulers, uplift the afflicted, fill the hungry with good things, and fulfill the covenant made to Abrham and Sarah and their descendents evermore. This is the narrative impressed upon him, it is a blueprint for Jesus’ life embedded in the Jewish narrative.

What is the invitation for us here and now? For self described eco-logian and Passionist priest, Thomas Berry, the foundational and identifying story of our lives, the “origin story” for those of us in the current age, must be larger, wider and deeper than past human origin stories, while simultaneously maintaining the same vocation as Jesus. In his presentations on the New Cosmology, Berry would often state that, “Earth is primary. Everything on it, including humans, is derivative.” (Thomas Berry, Selective Writings on the Earth Community, 142) Berry points us, his audience, away from an anthropomorphic God to a God of all Creation. As we face climate destruction, Berry points to our salvation: an understanding that we–like all people and animals and plants–are descendants of Earth. This origin story connects us to all forms of life. This origin story widens our concept of self and family and–in a chain reaction of conversion–disrupts an old order that relies on the kind of arrogance that leads to exploitation of others. If we are “of the same line” as the birds and the bears and the bees, who are we to take or destroy what is essential for their life?

Thomas Berry would frequently remind audiences that all early religions reverenced the divine spirit found in nature. Then, beginning in the 8th century BCE, the Greco-Romans initiated a shift toward exploring “the self”. Humans started centering themselves in the context of the Universe for the first time. Civilization was prioritized, and nature became its obstacle. The land was brutalized and cities constructed in its place. Ancestral knowledge passed down for millennia teaching the ways of living in right-relationship with Creation was replaced instead with an unyielding emphasis on individualism and technological advancement. Wars ravaged and empires were built. Conformity was valued and diversity feared.

This is the world into which our Emmanuel (“God with us”), is about to be born. At the birth of Western Civilization’s destructive potential, a baby named Jesus with a vocation of redeeming the human race, arrives on the scene. He will later repeatedly direct our attention back to nature through his model, teachings, and ministry–turning water into wine, calling fisherman, extolling shepherds, remarking on flowers, sailing on the sea of Galilee, offering Parable about the Sower, praying in the the Garden of Gethsemane. Let us remember this lineage and celebrate this Christmas that we share a heritage with Jesus himself, and profess the same vocation. 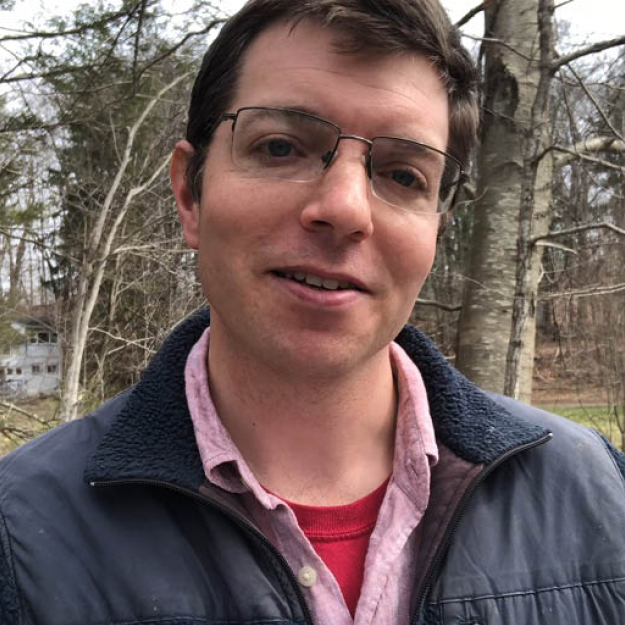 Sean Gargamelli-McCreight is an educator and co-founder of Benincasa Community, a lay community named in honor of Catherine (Benincasa) of Siena. We began in NYC in 2015 by “resurrecting” vacant convents and offering hospitality within them. Now at home in Guilford CT, we grow food using restorative organic practices to share with others and create innovative outdoor educational, theological, and athletic programming to promote right relationships with land, one another, and God.
Explore
Engage
To top
Explore

Thomas Berry’s “Three Principles (or Grammar) of the Universe” give us a framework for honoring our common lineage and common story. The following was adapted from Berry’s “The Great Work, Our Way Into The Future”.

What we refer to in these three principles is the interdependent dynamic energy that courses through every aspect of life, the three primordial patterns that are present in all levels of existence, the governing intentionality of all, the way the universe orders its creative display of energy everywhere, in everything and at any time — from the flaring forth of 13.7 billion years ago, right down to this present moment and onwards into every future expression of life.

Life, all dynamic communities, and healthy individuals must possess these three qualities in order to exist, thrive, and grow. All three must be present and have been present since the origin of everything. They can also be helpful tools, barometers of justice for evaluating ourselves, our communities, affiliations, and relationships with one another and all forms of life.

Pick a natural or agricultural place to contemplate. A forest. A river. A city street with a natural area. An urban park. A farmer’s field.  Find a comfortable place to rest in or near this place. Enter into prayer in whatever way is natural to you. Invite Holy Wisdom to open your heart. When you are ready, reflect on the following questions:

Karen Washington grew up in New York City, attended Hunter College and received her masters in occupational biomechanics and ergonomics from New York University in 1981. Washington studied organic gardening at the Center for Agroecology and Sustainable Food Systems at UC Santa Cruz in 2006.

In 1988, after years of tending a garden in her backyard, Karen Washington helped found the Garden of Happiness in the Bronx. A decade later this garden teamed up with other community gardens in New York City to launch a farmers market. In the late 1990s then Mayor Rudy Giuliani attempted to sell many community garden properties at auctions. Using various tactics such as protests, civil disobedience, and diplomatic negotiations, Washington and other community activists succeeded in saving the plots for continued use as community gardens. Washington founded Farm School NYC and Black Urban Growers.

In 2014, Washington began an apprenticeship at Roxbury Farm in Kinderhook, New York. After her apprenticeship, she “retired” to co-found Rise and Root Farm in Chester, New York. In 2018, rather than using the term “food desert,” she coined the intersectional term “food apartheid” to bring attention to social inequalities and injustices in the entire food system.

REPAM (the Pan-Amazonian Ecclesial Network) was founded in 2014 as a movement made up of thousands of community organizations in the Amazonia region to promote the rights and dignity of the people who live there and to bring to the world’s attention to the fragile situation of indigenous people in the Amazon and the critical importance of the Amazon biome to the planet – our common home. Learn more by visiting their website https://www.repam.net/es/ 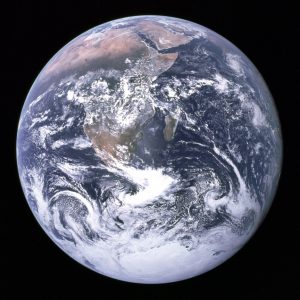 The Blue Marble is an image of Earth taken on December 7, 1972, from a distance of about 29,000 kilometers (18,000 miles) from the planet’s surface. Taken by the crew of the Apollo 17 spacecraft on its way to the Moon, it is one of the most reproduced images in history. For many, this image and others like it revolutionized the way in which they comprehend our “Earth-self”, the human race living as one with the more-than-human on this planet.